Back in 1935, when Sprout Waldron created the first modern vertical annular die press, the problem of compression was definitively solved.
The first machine, called Simplex, was a great progress thanks to its speed, its moderate price and the need for low maintenance.

However, we must wait for the end of the Second World War to see the number of machines sold multiply. From 1950 onwards they spread all over the world. Gradually they were perfected to become well-developed machines. 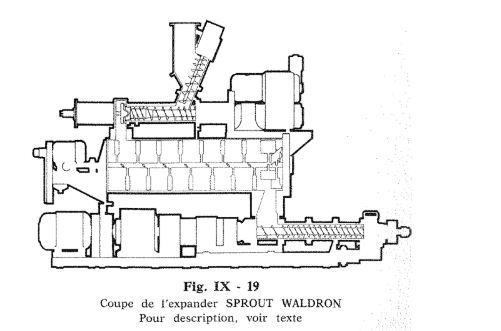 In the 1960s, global technological development was constantly evolving. The hydrothermal treatments that prepared the material for the compression process constituted a discovery that would mark a turning point for the feed industry.
Manufacturers appealed to numerous systems. Some of which were abandoned but others, however, achieved success. Although now the market has standardized, a certain unanimity has been reached regarding the functions (Feeding, Preparation, Compression, Serving), many manufacturers have proposed original machines that deserve to be carefully examined.

The current presses have reached a high degree of perfection from the point of view of design and serving. Trends go towards an increasingly elaborate preparation, because it is noted that this capital factor can alter the conditions of use of the presses. The rotary die type remains by far the most widespread.