Journey back in time: the first pellet mill

“We condition the components. We transform them. We compress them with kW and dies."

The compression of flour products originated in the oil mills. In fact, by extracting the oil with hydraulic presses, panels of oil seeds were produced, distributed in tables or crushed.

Towards the end of the 19th century that an English manufacturer (Hull) decided to produce for the first time a compressed balanced food compound designed specifically for cattle. At the time, hydraulic vertical presses were used in which the pressure varied from 200 to 300 kg per cm2. In the face of the low efficiency, the high production costs and the numerous breakages caused by this system, the producers subsequently ended up adopting the ribbed presses, then used for packaging coal agglomerates.

Around 1910, a certain number of feeds were found in England, presented both in ribbed plates to facilitate their distribution and flakes and granules. 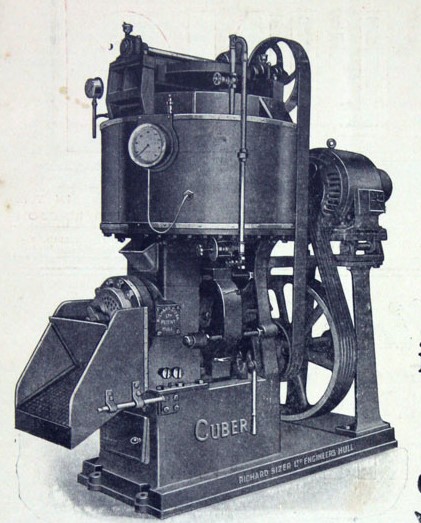 The first machines were produced by the Sizer company (Hull, 1928) and made their appearance in France after the First World War.

The first Cuber model produced large pads. It was used around 1930 to produce pellets. This machine had a fixed horizontal die, the rollers operated from above forced the feed into the holes. This huge machine, however, produced little and was very expensive.